What not to do in Amsterdam 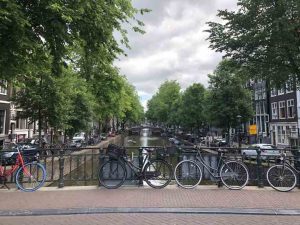 Amsterdam is one of the most beautiful and visited cities in the world. It offers its guests a huge variety of activities and attractions. The city is busy and vibrant, with a rich history and its own traditions. Amsterdam hosts millions of people every year and has developed its own touristic scene. Here’s a handful of things that you as a tourist shouldn’t do in Amsterdam:

Do not smoke weed in public places

Buying and smoking weed is allowed ONLY at the coffeeshops. But don’t mistake them for the regular coffee shops or cafes. If you are planning to grab a coffee, you will have to visit a cafe and not a coffeeshop. Also, you are not allowed to smoke tobacco inside the coffeeshops, and most of them don’t serve alcohol and food. They have a cosy, relaxing atmosphere to enjoy soft drugs – without mixing them with alcohol or cigarettes.

Don’t ever buy drugs offered to you from the street dealers. More than that, heavy drugs are ILLEGAL in the Netherlands. Buying hard drugs like cocaine or ecstasy from street dealers in Amsterdam is both illegal and dangerous.

Do not take photos of sex workers

One of the most popular neighbourhoods of Amsterdam is the Red Light District. As it is the oldest area in the city, it’s full of historical buildings, scenic canals and beautiful alleys. But a fascinating attraction is sex industry workers, standing right in the showcases. Never take photos or videos of sex workers. It is strictly prohibited in this area. You’re not allowed to take photos in order to protect the identities of the sex workers. Their security will take away your camera, and things could get confrontational.

Don’t stand or walk on the biking lane

This is definitely one of the biggest irritations of locals: tourists walking on a bicycle lane. Amsterdammers are used to riding a bike and do it really fast. Blocking the lane can be dangerous for both. Amsterdam is fully adapted around two-wheeled transport and the entire city is connected by a large network of cycle paths. You can see the difference between the bicycle- and walking lanes by looking for a bike icon. Also, in many places, the cycling lane has a red colour.

This is actually a law. If you are not from the European Union, make sure to have your passport on you as you can get fined for not carrying identification. Generally, you won’t have to take out and demonstrate your identification all the time, but you might need to show it if you are planning to enter a coffeeshop. Most bars and nightclubs in Amsterdam do not check the documents unless you look younger than 18, which is the drinking age in the Netherlands for spirits.

Don’t forget to take your jacket, umbrella or raincoat

Even if the weather forecast promised you a sunny weekend, do not count on it too much. The weather in the Netherlands changes often and fast. Make sure you have your warmer jacket for the evening promenade or your raincoat to not get wet in the middle of your city tour.

If you are choosing to rent a bike during your trip to Amsterdam, please make sure you’ve read the rules for the bicycle riders. As the locals are skilled riders, they ride really fast even during the night, so make sure you are easily visible. If you are about to buy or rent a bike, be confident in your seller as there are people selling stolen bikes in Amsterdam. Besides being a crime, buying a stolen bicycle is particularly risky as these street bikes are usually damaged or missing vital parts.

Don’t make a lot of noise during the night

Amsterdam is buzzing on the weekends, but during the week, bars and nightclubs close early or do not open at all. Many local people live and work in Amsterdam and want to get some rest during the night, so please respect Amsterdammers and try to keep it down when you are out. If you are caught by the police officers being too loud, you can possibly be fined or taken to the police station.

Do not only eat fast food

Dutch cuisine has something to show you and will definitely surprise you with its diversity and tastiness. From Stamppot and Stroopwafels to Chunky Dutch Chips and Snert, Amsterdam is packed to the rafters of scrumptious food – so make sure you make the most of it! And thankfully the Dutch cuisine is suitable for any wallet. You will be able to try lots of different traditional dishes without leaving the street you are in, as there are always trolleys and small cafes around, serving delicious snacks.