The most beautiful canals 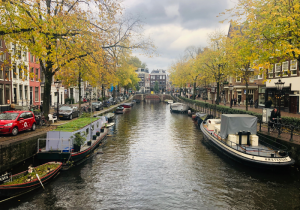 Being the most watery city in the world, Amsterdam is famous for its canals. They are a landmark of Amsterdam and of great cultural and historical importance, and last for more than 100 km. Since 2010, the canal ring in Amsterdam has been granted UNESCO World Heritage status. This area and the original community plan remain very well preserved to this day, thanks to the efforts of the community and private owners. The Canal Ring celebrated its 400th birthday in 2013, too. Amsterdam’s Canal Ring has developed since its construction in the 17th century to be one of the most unique urban landscapes in the world. The city is divided by these 165 canals into a series of small islands linked by over 1200 bridges. This tiered waterway system covers over 100 kilometers of space and is one of the largest structures of its kind ever constructed.

And it remains not only a historic and majestic city-wide water network, but also an incredible backdrop for fantastic cultural and sporting activities throughout the year. Amsterdam’s canals play host to a number of big events on or near the water every year. The city turns orange at the end of April to celebrate King’s Day, a massive event which sees the canals full of floating party-goers. Similarly, the world-famous Canal Parade is the highlight of the annual Gay Pride festivities in August, featuring decorated barges, plenty of color and music, dancing participants and fun for all, whether on a boat or watching from a bridge. The Grachtenfestival (Canal Festival) also gives the Canal Ring a lot of music. And the canals are illuminated every autumn and winter during the Light Festival with light sculptures.

The best way to explore Amsterdam canals is to take a boat trip. You can rent a private boat to drive yourself or you can join a boat cruise with the experienced guide. The Grachtenhuis, a beautiful museum on the Herengracht that revolves around the history of the canal loop, should be visited. Visit the Woonbootmuseum if you have always wanted to look inside one of the houseboats on the canals.

Here are the must see canals in Amsterdam:

Just outside the hotel you will see Herengracht. Herengracht is considered the most important canal in Amsterdam. It used to be home to the wealthiest merchants, mayors and the city’s most powerful regents in the 17th century. The Dutch West India Company’s headquarters are also located. An address on the Herengracht is still considered prestigious. The official residence of the Mayor of Amsterdam is located in a house at number 502 on this canal. This is the canal with numerous old but beautiful houses with golden plates and marble stairs.

Keizersgracht Canal is the center of the city’s three major canals. It was named after the Austrian Emperor Maximillian. The canal is 31 meters wide, which makes it the city center ‘s widest canal. The digging of this canal began in 1612, at the same time as Herengracht and Prinsengracht. Originally, a broad, waterless boulevard was built here, but the prospective residents wanted a canal in front of their homes so they could get to their house by boat. This canal is also surrounded by magnificent old 19th, 18th and even 17th-century houses. The oldest building on the Keizersgracht is the House with the Heads, built in 1622 and named after the 6 head-shaped ornaments, all of which can be found on the facade.

This is the outermost of Amsterdam’s three key canals. Together, these three canals form the city’s “Fourth Outlay,” an expansion project that began in 1612 and ended 50 years later. It made the town four times as large as it was when it began the project. The population of the city rose from 50,000 to 200,000 during the 17th century, making Amsterdam the third largest city in the world, after London and Paris. With its impressive length of more than 3 kilometers it cuts right through the city center. Due to a great mix of various features, Prinsengracht is always buzzing with life. There’s everything at Prinsengracht: homes, offices, stores, galleries, cafes , restaurants, churches, coffee shops, museums, etc. Two real Amsterdam icons are located in the Westerkerk (church) and Anne Frank’s Building. It is also home to many houseboats.

Reguliersgracht is another great location for a ‘postcard shot’ of Amsterdam just three minutes walk from the hotel. The main canals of Herengracht, Keizersgracht, Prinsengracht and Lijnbaansgracht are connected by this narrow canal. Reguliersgracht follows a straight line, offering a unique view of seven identical bridges in a row, unlike most other canals. There is Amstelveld, a quiet and spacious square that you would not expect in the center of town, is near the intersection with Prinsengracht. Café Nel, a wooden church from the 17th century converted into a brasserie with a wide outdoor terrace, impressive trees and a playground, is the beating heart of this town.

In Amsterdam, the Singel is a canal that starts from the IJ-river and ends at Munt Square or Muntplein in the Netherlands, where it flows into the Binnen Amstel. In 1428, the Singel was excavated and expanded in 1450. Initially, it was a moat that protected Amsterdam ‘s western boundaries. There are amazing, historical buildings on this canal. There is even one that dates back to 1600: the “De Dolphijn” house. This used to be Frans Banninck Cocq ‘s home, which was painted by Rembrandt in his Night Watch. Singelgracht also hosts the famous Catboat. The Catboat is the world’s only floating animal sanctuary. A sanctuary for stray and unwanted animals, which has also become a world-famous attraction thanks to its unique place on a houseboat in Amsterdam ‘s charming canal belt.

Definitely the most beautiful canal in Amsterdam. The Brouwersgracht is a radial canal in Amsterdam which cuts across the others and connects the four main canals of Amsterdam. It’s a mix of beautifully preserved homes, many lovely houseboats, tiny streets, glorious trees, elegant bridges and picturesque views at the intersections of the other canals. In the old days, the Brewing Centre of Amsterdam was Brouwersgracht. They used many of the warehouses to store the crops. The water was really dirty, so a lot of beer was drunk by people.

One of the must-see canals in Amsterdam is Bloemgracht which is located in the famous Jordaan district. The Jordaan was built in the 17th century as a low-cost alternative to the main canals, which were home to the rich and famous.

The Jordaan canals are narrower, the houses along them smaller and the bridges slimmer. This gives Jordan district a very cozy atmosphere. It has a good mix of residential homes, small scale offices, one-of-a-kind stores, galleries, restaurants, rest, just like the major canals. Bloemgracht is an interesting mixture of large and small houses and a couple of nicely flower decorated bridges. Perfect for a boat trip.