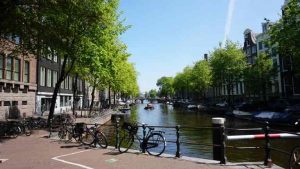 Amsterdam is considered to be the world’s cycling capital. Did you know that there are more bikes than people in the Netherlands? Statistically, each resident of Amsterdam owns at least 1.5 bikes. Almost everyone knows how and does ride a bicycle in Amsterdam – no matter the age and social status. There are over 881,000 bikes in Amsterdam. Many Amsterdammers just decided not to have a car. Not only for fitness/economic reasons, but this is just by choice. Not only is cycling cheap, convenient and safe, it’s also eco too. On any working day between 8:00 and 09:00 in the morning almost two million bikers will be on Dutch roads!

Cycling is probably the best way to explore Amsterdam. There are cycling paths everywhere in the Netherlands. They are clearly marked so you won’t be able to miss it.

Before visiting Amsterdam, learn some cycling tips which will be extremely useful, especially if you are visiting the Netherlands for the first time. Here are the most useful tips for cycling in Amsterdam: